The April 1960 issue of Harvard Business Review carried probably the most influential article in the area of marketing titled ‘Marketing Myopia’ by Ted Levitt. Its first sentence went as:

‘Every major industry was once a growth industry. But some that are now riding a wave of growth enthusiasm are very much in the shadow of decline…’. It goes on to say that ‘the failure is at the top’

Now what’s marketing myopia got to do with RG, Congress and spokespersons? In TV debates it’s quite surprising to see how Congress spokespersons refuse to either  listen or show openness to ‘introspect’ or attribute the party’s decline to top leadership. On the contrary they blame it on opposition or competitors and also find faults with voters for not being able to see sinister design of their main rival, BJP.  Upon being quizzed about developments in Bihar and switching over of Nitish to BJP, they try to find faults him.

Levitt says, ‘The railroads did not stop growing because the need for passenger and freight transportation declined. That grew’. 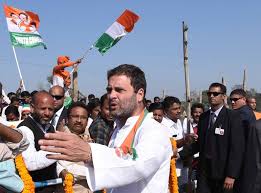 Has the need for democratically elected government declined? Do people not look at government for governance and progress?   In fact the need grew with the arrival of new informed youth at the political landscape.  Why did Congress which once stood as the only party in India with footprints everywhere come under shadow of decline? It assumed invisibility of its product and believed there can never be a substitute product to replace it. Levitt explains why the once booming dry cleaning industry was stifled. It did not go in trouble because of better way of cleaning (direct linear competition) but because of unexpected source of synthetic fibers and chemical additives (unexpected indirect competition) that reduced the need for dry-cleaning. Congress could never fathom that competition could arrive from unexpected quarters in the form of Mulayam, Banerjee, Lalu and others. For it believed in superiority of its product.

Companies get caught in self deceiving cycle which is caused by assumptions that there are no substitutes, faith in mass production and preoccupation with product. There is no guarantee against product getting obsolete. If you don’t make it obsolete by your own effort the others definitely will. Congress’s faith in its formula was so strong that it failed to see the movement in market and emergence of new alternatives.

The cracks in the voter base of Congress were signals of latent misfit between voter expectation and what it promised. Yet it believed in the power of selling. Selling focuses on the needs of the seller whereas marketing focuses on needs of buyer. Its strategy has been persuasive which sought a change on the voters’ end instead of changing its own political product (old narrative). It attempted to fit a square peg in a round hole. The key is what a company offers  is not determined by its managers but rather by the takers. Congress has been so obsessive about its narrative, its win-ability that its perception couldn’t go beyond it. The emerging voters are not extensions of people who were enamored with the role Congress and its leaders played in freedom struggle.  The new generation is rational, clinical in approach, seeks gratification, wants good life and wants it immediately and they are believers of achievement not inheritance.

Congress must note that any industry including politics is a customer satisfying process and not merely  a  goods producing one. Therefore, political agenda begins with voter expectations not with what you have. This is the starting point and process should be worked out backwards. So don’t push RG and the old narrative. Shrinking voter base and loss of states is testimony to that.

Spokes persons of Congress please don’t look into mirror to create your appearance. It’s better to look out of window and find out what others want you to look like. In defending current leadership and agenda you damage your party more than strengthen it. The writing on the wall is clear: voters don’t want Congress in its current form so get to drawing board and do some visioning sessions.

Error: Twitter did not respond. Please wait a few minutes and refresh this page.